When I found out I was pregnant in September 2010, I just assumed I'd do what everyone else does - find an OB/GYN and deliver in a hospital with an epidural. As my pregnancy progressed, I became increasingly disappointed in the care I was receiving with my doctor. ﻿

Every time we met it was like it was the first time and he never followed up with my concerns. I began to think more about what I wanted and realized that I had choices in how my pregnancy would continue and how I would labor and deliver.

I began exploring my options and started doing some research online. I also watched "The Business of Being Born," which opened my eyes to a whole new world of possibilities. I found The Midwife Center through Google and after a lot of discussion with my husband Bob and thinking about it, I decided to switch providers in December. It was the best decision I could have made.

Starting care at The Midwife Center

Kathy was the first midwife I met and I was impressed with how much time she spent getting to know me. Appointments with other midwives always started the same: "Do you have any questions?" and were more relaxed than my experience at the doctor's office.

﻿The Midwife Center sees birth as a natural experience and I liked the
way I was made to feel that everything I wanted to experience during my ﻿﻿pregnancy and childbirth was not only normal but achievable, including
my goal of natural childbirth.﻿﻿

I liked The Midwife Center, but was still unsure of whether I wanted to labor and deliver there. We decided plan for Mercy Hospital for the birth but hired Amy, a doula, at the suggestion of the midwives to help me follow through with a natural delivery.

As the months went on we gradually became more comfortable at The Midwife Center. We took the childbirth class with Priscilla, a nurse at the center. The class was excellent and we learned a lot. It was after the class that I decided I wanted to switch the birth to the birth center. Looking back, I see all these decisions as leading up to my wonderful experience of giving birth to our first child.

My due date was May 15th. My labor started late the night before, with a back pain that kept coming and going throughout the night and the following day. We took our dog Jake for a walk and went to Target to keep my mind off of the contractions.

I was feeling the baby move less than what I felt was normal and Amy suggested I call the midwives to see what they thought. I spoke with Kara, who was the midwife on call that day, and she said to eat something and lay down for half an hour and time how many times the baby moved and how many times I felt the backache. The baby moved about five times in a half hour, which Kara said was good when I called her back. She said she'd be happy to meet me at the hospital if I was concerned, but I had just wanted to be sure the baby was okay. She said if it was labor contractions I was feeling then it was normal for the baby to move a little less as it got ready for birth.

I called Amy again to keep her updated and she suggested I try to rest. She also said I could try the tub. I was afraid it would stop my contractions, but Amy said this would be a good way to tell if they were real. If they slowed down they were most likely practice contractions. I got in the tub and immediately felt relief but the contractions still kept up. Bob would apply counter pressure which helped a little. I labored in the tub for most of the night.

Arriving at The Midwife Center

Kara was waiting for us and had the Ocean room ready. I immediately kicked off my flip-flops and went on the bed in a contraction. After it was over Kara checked me, which surprisingly didn't really hurt. I was amazed when she said I was nine centimeters already. She asked if she could break my water and I agreed. I got in the tub for about 15 minutes and then started to feel a lot of pressure. They helped me get back out so I could start pushing.

Pushing was challenging, but everyone coached me through it and encouraged me the whole time. I felt at times like I was in a fog. My sister made it to the center just as I began pushing. Jamie, the nurse, continuously checked the baby's heart rate to make sure he or she was okay.

Twice Kara told me to reach down and feel my baby's full head of hair. It was really strange but also motivating. I pushed for 40 minutes. I was in shock when they placed him on my belly and so excited. Bob checked and announced it was our Wyatt. Our beautiful baby boy was born at 6:47 a.m.

Immediately afterwards I really didn't feel any pain. The next few hours passed quickly as we hung out with Wyatt, ate breakfast, started breastfeeding and both had our vitals checked numerous times. My second shift team was Diana (nurse) and Ann (midwife). Both were great and seemed genuinely happy for me and the great experience I had with the birth.

We checked out around 3:00 p.m. and began our new adventure in life. I was extremely lucky to have the birth I'd envisioned. I was surrounded by supportive people who helped me bring my son into the world in a beautiful and meaningful way.

The whole experience changed my life and made me proud of what I accomplished.

I would do it all over again in a second and plan on continuing to use The Midwife Center for my normal checkups and for when we have another child. 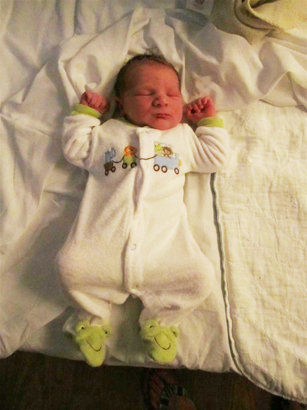