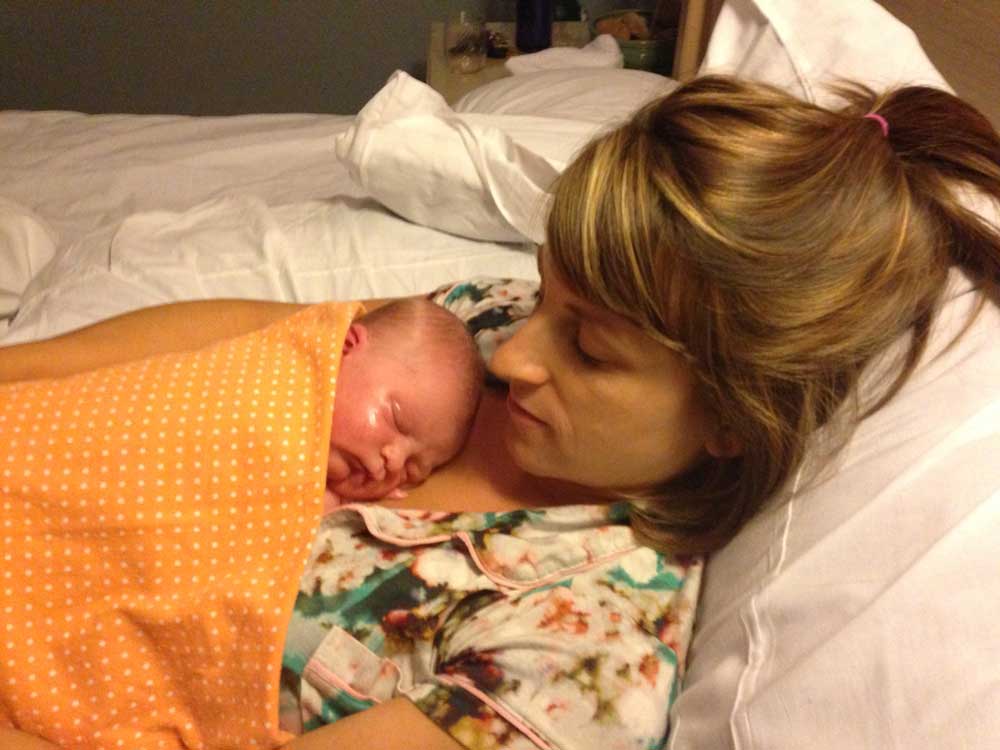 My due date was July 31, but I wasn’t surprised to find myself still pregnant three days past my due date. Our daughter made us wait ten long days past her due date, as first babies often do.

I had been having false labor for a few days where contractions would even wake me in the middle of the night, but then die off. I wasn’t convinced that anything was really happened when I went to bed Sunday night on August 2nd, and woke up to contractions again. They went away after an hour or so, but when I woke up the next morning they were back, and this time I could feel them around my back as well as my belly, so I was hoping that this might be it. I didn’t want to cause a false alarm by calling my husband at work and the contractions were really sporadic, so I just went about my day.

I made plans to take my two and a half year old, Susanna, to the park. Every day I kept trying to fit in one more fun activity for her while it was just the two of us. My mom had already been planning to hang out with us so she joined us. The contractions continued the whole time we were at the park, every once in a while they were strong enough that I had to stop what I was doing, but I still wasn’t convinced.

Around noon or so we headed to a Thai restaurant for lunch. During lunch, the contractions got stronger and I was having a hard time enjoying my meal. By the time we were done eating I told my mom I felt like we needed to get home so that I could focus on timing the contractions. It was about 1:30 p.m. at this point so I was also getting a little nervous about the fact that we were heading into Friday afternoon rush hour for a possible trip to The Midwife Center.

When we got home I timed my contractions but they were all over the place, five minutes apart, then ten, then two, then ten minutes apart. Around 2:00 p.m. I called Theresa, the midwife on call, to check in with her. We decided that it sounded like I was still in early labor since the contractions were irregular and weren’t lasting that long. She told me to lie down and if it is false labor, that should make the contractions subside.

I called my husband Ben to clue him in on what was going on and went inside to lie down while my mom played with our daughter in the yard. Ben said he would check in with me in an hour. By 3:00 p.m. my contractions were so strong that I couldn’t really talk through them. I knew we had to get going fast, but Ben works forty-five minutes from our house. I called and told him to get home right away and I tried to keep myself distracted and comfortable on the birthing ball. I called and told Theresa that we would be there by 4:30 p.m.

When Ben arrived home at 3:45 p.m. I was in tears, from the pain but also from fear of what was to come. I had a 15-hour labor with our daughter, who was posterior, which included a transfer from The Midwife Center by ambulance. I did end up with a vaginal birth, and had an epidural and pitocin. It all worked out in the end, but was not the birth that I had wanted. It was really painful, so I was a little afraid of a repeat of my first experience.

I was also sad to be leaving our daughter. We had never left her overnight, so I was worried about how she would do since we were heading to the center in the early evening. I figured she would be going to bed without us for sure.

Arriving at The Midwife Center

We got in the car at 3:45 p.m., hoping that traffic wasn’t too bad. Luckily, we were going into the city when everyone else was headed out. I was having contractions every few minutes. I’m not sure how often they were happening, because at that point I wasn’t able to time them. I was able to talk and feel “normal” in between contractions, which isn’t something I experienced with my first labor, so that was really helpful. It was a little surreal to be driving through Lawrenceville and watching everyone go about their day as I was writhing in pain in the passenger seat! Ben didn’t say much the whole ride in.

We pulled up at the center at 4:15 p.m. and went into the Ocean room. We were fifteen minutes earlier than we had anticipated, but it’s a really good thing that we were. Once we were inside I had contraction after contraction with barely a break in between. They were very strong and Theresa told us to be prepared, things may move very quickly! And boy did they!

My contractions were so intense that I couldn’t find any position that helped with the pain. Cheryl filled the tub for me to labor in, but I put one toe in and knew it felt too warm for me at that moment. At that point, I started to feel pressure and thought I had to go to the bathroom. I told Ben to leave the bathroom, but Theresa and Cheryl came rushing in and told me that was the baby and I needed to be checked. They checked me while sitting on the toilet and said, yes, it’s time to push.

I was asked what position I wanted to be in and I said hands and knees. They made a big pile of pillows on the bed for me to rest my upper body on, and Ben was up by my head to hold onto me. The rest happened so fast. They told me to push and when I did, Baby’s head came right out! I could barely hear them talking to me, I think I yelled out (roared, actually) from the pain and shot myself forward. I heard them tell me to push again, and when I did Wesley came flying out! I had really shot my whole body forward on that push (good thing Ben was there) and almost flew off the bed!

It was 4:46 p.m., we had only arrived at 4:15 p.m. I was in shock and I think I just laid there for a second in disbelief because all of the sudden Theresa and Cheryl were yelling, Emily, get your baby! They wanted me to pick him up off the bed. I did and that is when I saw that he was a boy. His cord was really short so it was awkward to try to get him to my chest right away, so Cheryl helped me.

After that, we just relaxed in the bed together and Ben joined us. There was a thunderstorm and it was so nice to just lay there, enjoy our baby, and listen to the rain with very few interruptions. Cheryl and Theresa did what they needed to do, but kept Wesley on me the whole time.

I only needed two stitches and was truly not even in pain down below. We ate our delicious omelets in bed while Theresa did a quick check up of Wesley. He was perfect. He weighed 7lbs. 9oz. which was a shock after our daughter had been 9lbs. 3oz.! He nursed like a champ. I let him take his time and find the breast on his own.

Since everything had gone so smoothly, we were allowed to leave after the minimum four hours as long as I was able to pee and walk. Since it was going to be approaching bed time and Susanna had never been put to bed by anyone but us, we decided to leave as soon as we could. It would have been lovely to lie around and relax more, but it was also exciting to get to go home already. I had been worrying for months about how Susanna would let someone else put her to sleep and the way it worked out, we were only gone from 3:45 p.m.to 9:30 p.m! We arrived home and Susanna was so excited to meet her baby. She looked right past me as I came in the door. All she wanted to see was the baby in the car seat. She held him, and we took some pictures with my parents and my sister, and then everyone went home. I put Susanna to bed as usual, it was so surreal.

I couldn’t be happier with my “redemption birth” as I like to call it. I wanted so badly to deliver at the birth center the first time, but things didn’t go that way and I had been a little disappointed. This time was the complete opposite and I really didn’t think that was possible. I just expected it to be so hard again. I am so glad we gave the birth center another try for this delivery and weren’t scared off by our first experience, because it was just perfect and amazing.